Suzanne Aubert became a larger than life force within New Zealand, by her care for the poor, Maori and her medicines/rongoa.  Many people from different cultures have entered New Zealand and become part of our country's story.

Using traditional taaniko weaving technique with contemporary materials, and a combination of other techniques together, create a visual story expressing new location, dislocation, adaptation and acceptance, issues still being faced today, by those who enter our country and those already living here.

The cloak is a metaphor for the care and protection Suzanne worked for. The shimmer of the hand dyed silk and the varieties of colour symbolise the richness of our bush as an abundant resource for healing purposes. 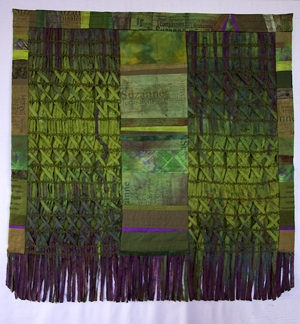 The taaniko weaving technique using the warp and the weft in the shot silk exposes the white and black 'fray' to provide a secondary pattern, reminiscent of the patterns left by the mud of the lahar.

This work is one in an on-going series about the remarkable life and work of Suzanne Aubert.

The cloak is a metaphor for care and protection and exemplifies her Christian charity which was an integral part of her belief.  She served Aotearoa by her involvement with science and medicine, Maori language, and standing up for the rights of people.

Her determination, fuelled by her spiritual beliefs was to be a cornerstone for the future.

The cloak made from recycled silk using taaniko technique is a symbol of the higher things she attained, and her graduation of acceptance by the Maori of NZ. 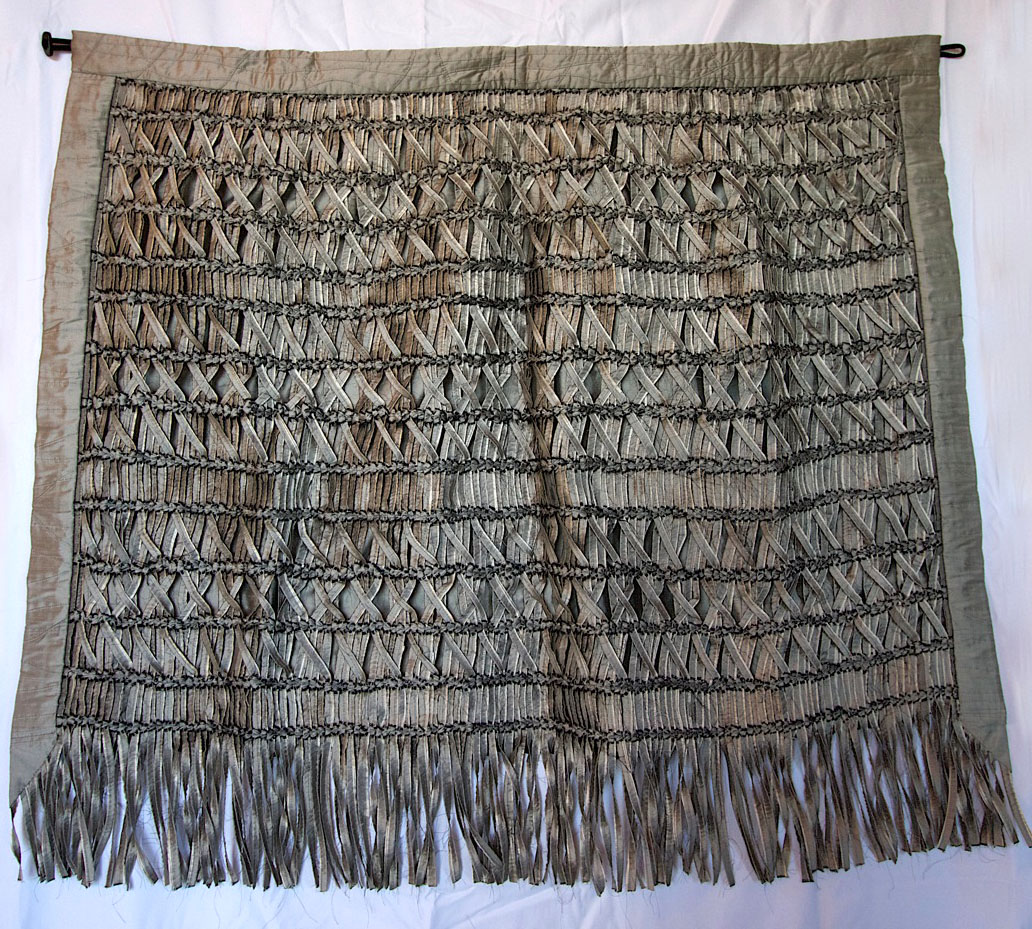 This work came out of the patterns appearing after the lahar of 2007. As the mud surged down the Whangaehu River, the powerful force of nature covered original growth, but formed new and wonderful patterns as it rested.

This is a work in progress. I have used little doors of taaniko weaving, using grey shot silk within a neutral ground. The doors are marked.

Conceptual ideas behind this series:

"They (the Israelites) shall take some blood and place it on the doorposts and the lintels of the houses......"

Did God really need a sign on the door in order to show which home was inhabited by Israelites and which not?

The door creates privacy, in addition to providing shelter and protection. The door is what separates the public person from the private person, the external self from the internal self.  In the privacy of one's home is where all the facades and inhibitions tend to fall away, allowing the best(and sometimes the worst) of what a person has to offer to come to the surface.

Doors are a place where there is a change of thought, a place where passing through the opening can be an act of commitment or faith.

A door can be an opening to a new opportunity, or to something not so good. There are wide doors, narrow doors, locked doors and soft  and zipped doors as in tents, where there is a measure of trust to sleep behind.

What sort of doors do we have? 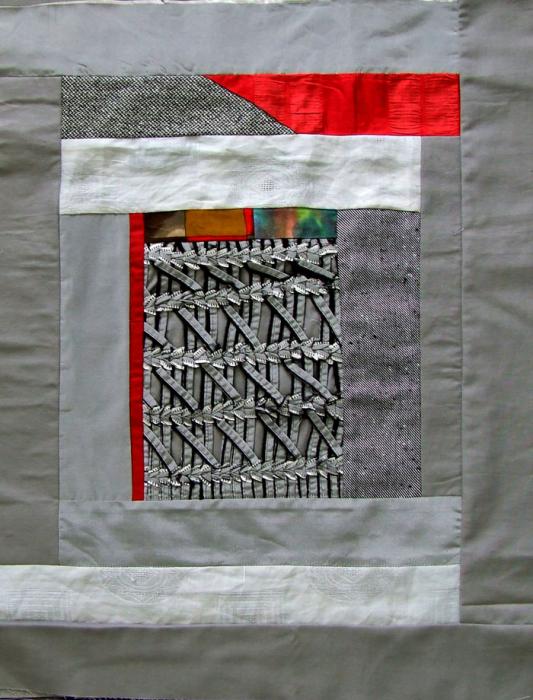 I have just quilted these two, and I have another 3 which I have joined to make Three doors more pathways..

This work is one in an on-going series about ‘Doors’ and their significance.

Doors are a place where there is a change of thought, a place where passing through the opening can be an act of commitment or faith.

The taaniko weaving with shot silk, is a new treatment of an old technique, creating patterns on the ‘marked’ doors.

'Kotahi te kōhao o te ngira, e kuhuna ai, te miro mā, te miro pango me te miro whero' There is but one eye of the needle through which white, black and red threads must pass.

Statement: Maori King Potatau gave this proverb (the title) in 1858 to demonstrate unity.  It has relevance today for our inter-cultural relationships. 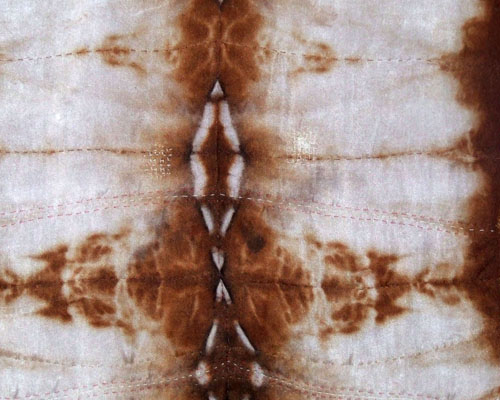 This work is from a photograph I took on August 15 when snow was on the ground. The architectural presence and strength of the tree trunks without foliage, in the midst of the coldest season, is an analogy for our lives……..the framework is important….a winter is necessary for spring growth. 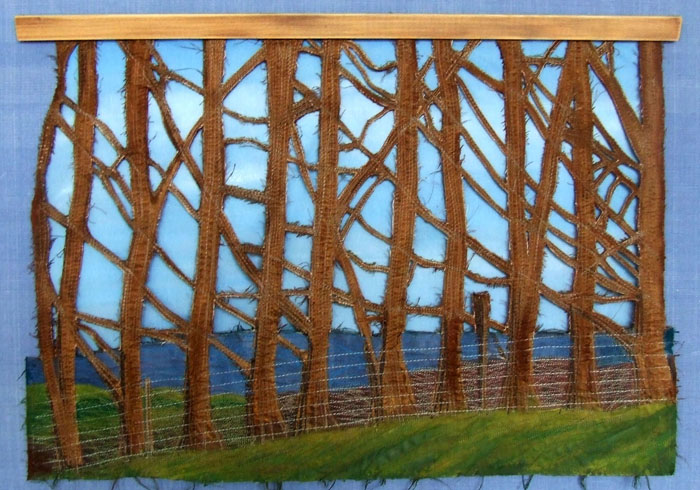 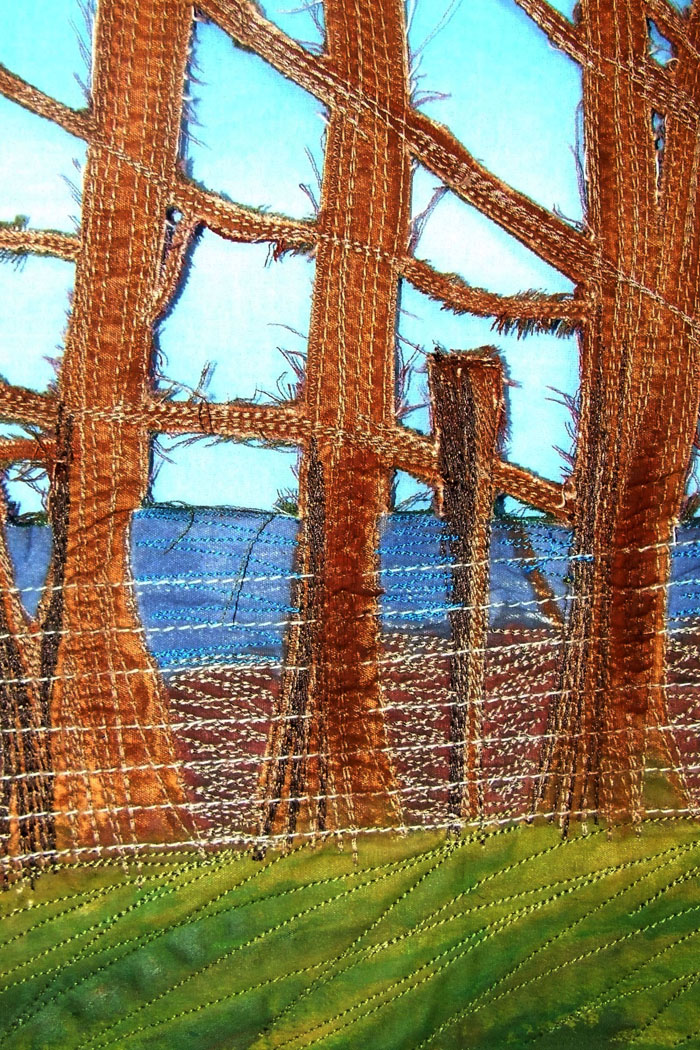 Having provided research and historical documents for Waitangi land claims, made me realise how important the maps are and how detail is poured over making meaning to settlement and belonging.

Our land is not an abstract physical location but a place, charged with personal significance, shaping the images we have of ourselves. ‘Waitangi claims’ research has assisted the practice of investigating the relationship between human perception and occupation of land. 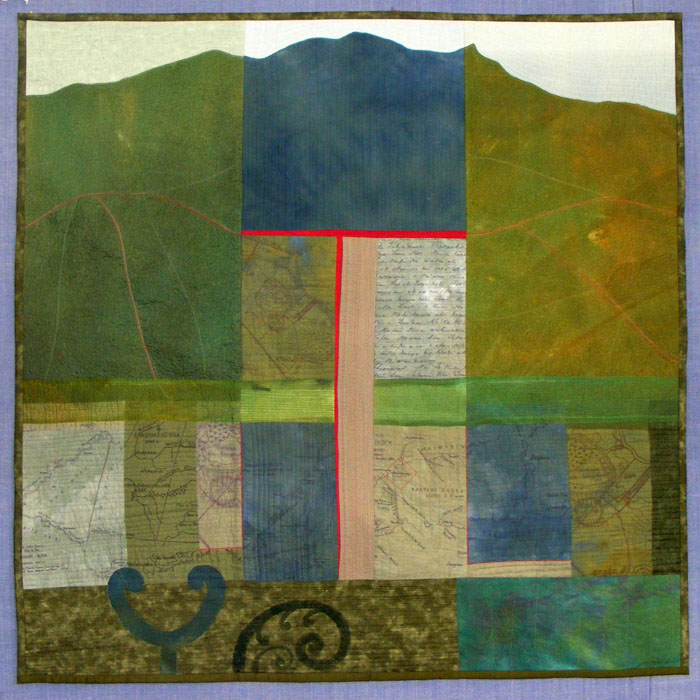 Winiata's peg: This quilt, another in the 'belonging' series.

This is part of the 'Made in NZ' exhibition showing in France during September 2009. (sold)

It is said that dreams are God’s forgotten language. The dream I had last year, left me with such a peace that I wanted to record it. The ‘lady’ is set in my environment 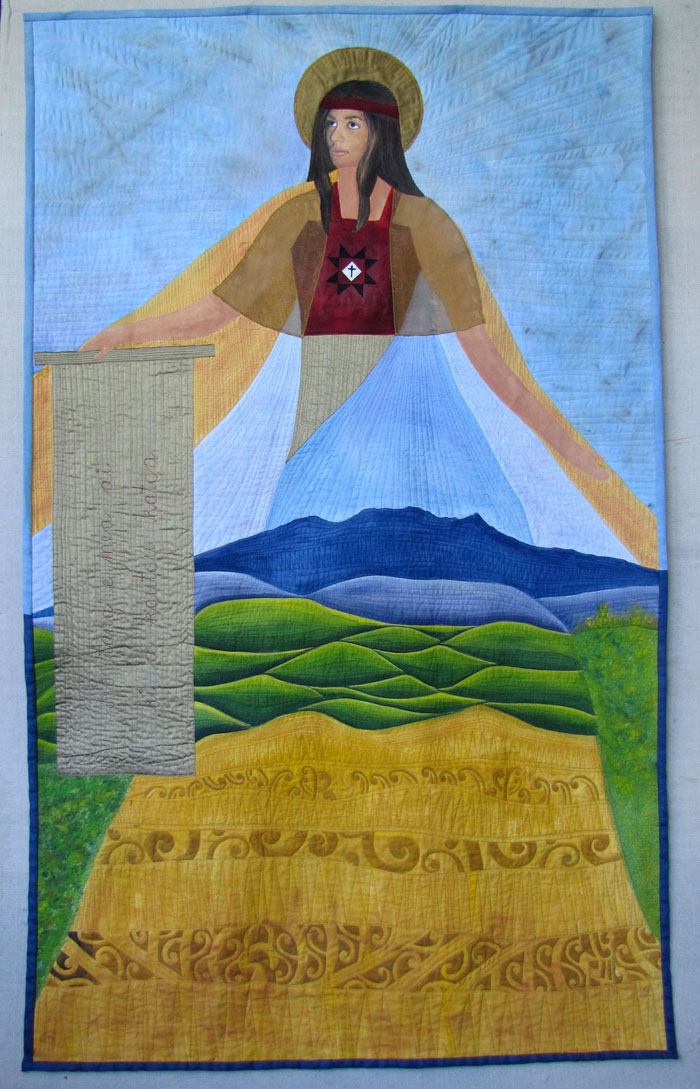 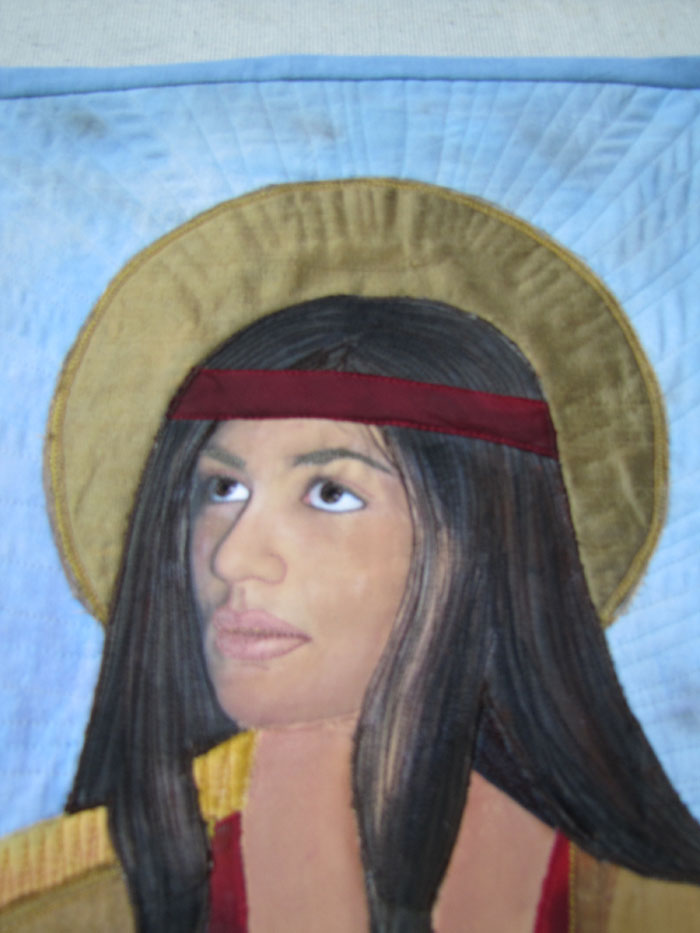 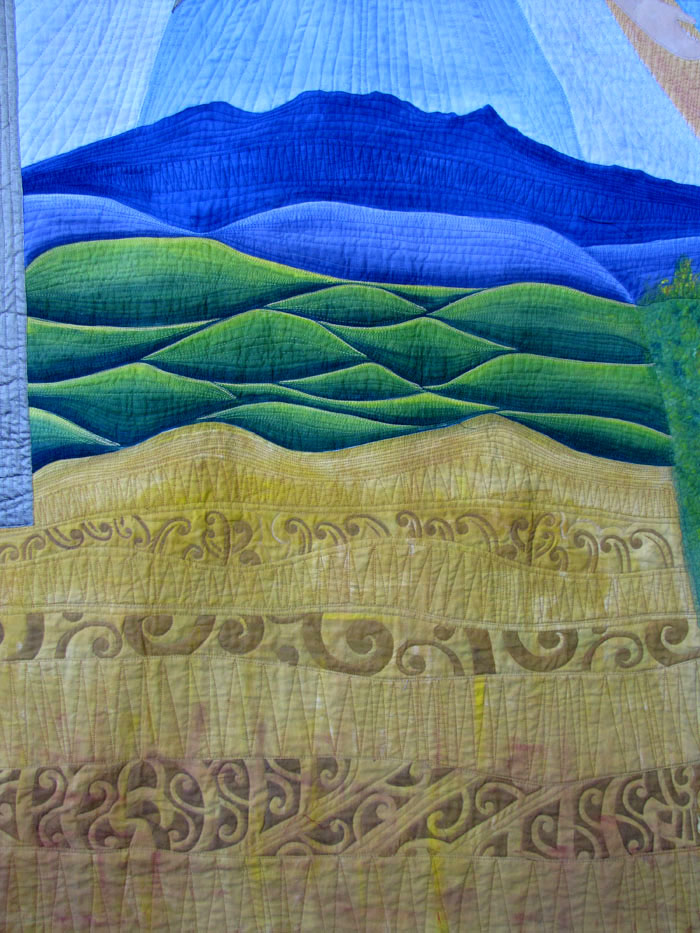 The inspiration for the body of work ‘Set Apart’, is the active life of the remarkable French woman, 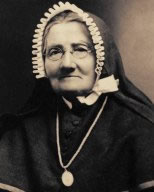 These works explore some of the elements which set her apart and, which makes her story worth telling. 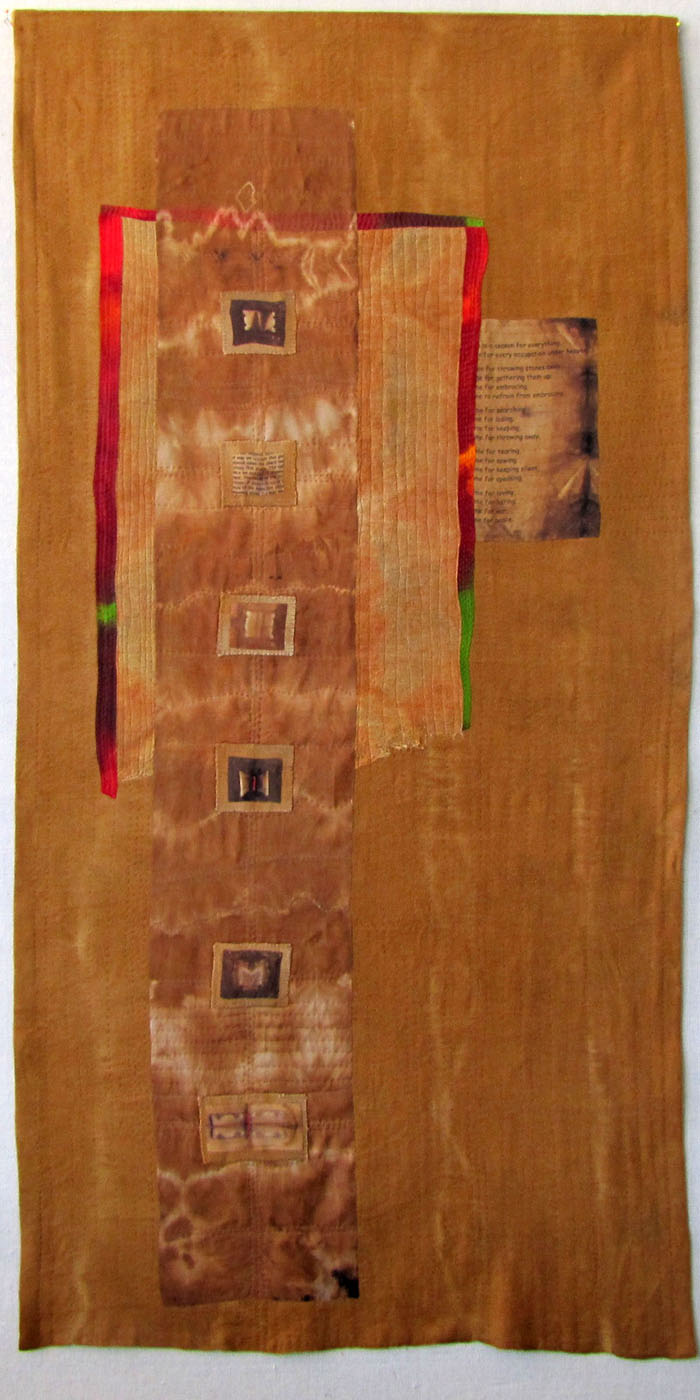 These tablets of ‘relics’ or ‘marks’ remind us that we all have a whakapapa, ie.  We belong to a filament of being, and we are each marked differently.

I composed this work during the day I sat with the icon and relic of Jean-Marie Baptiste Vianney, the Cure d’Ars.

I pondered that he’d had such a part in Suzanne Aubert’s life, and here again he had arrived from Jerusalem to us in Ohakune.

Suzanne travelled to Ars several times to see the Cure. She took two directions from her visit: One to reject marriage and the other referred to future events in her career which she could pinpoint. 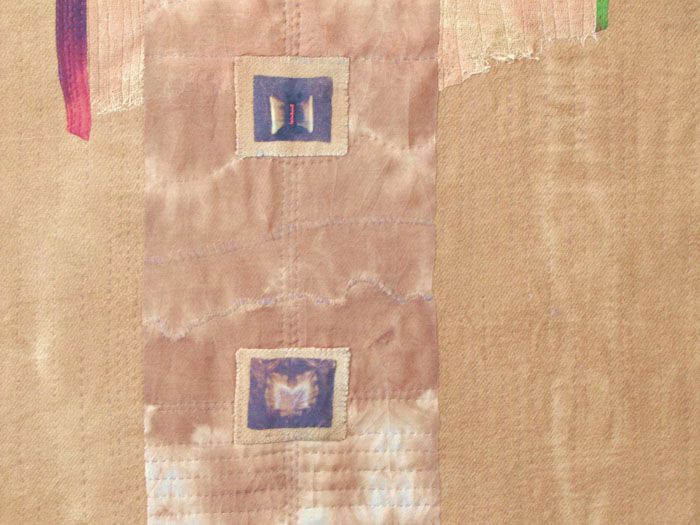 Title of Work: Set Apart I 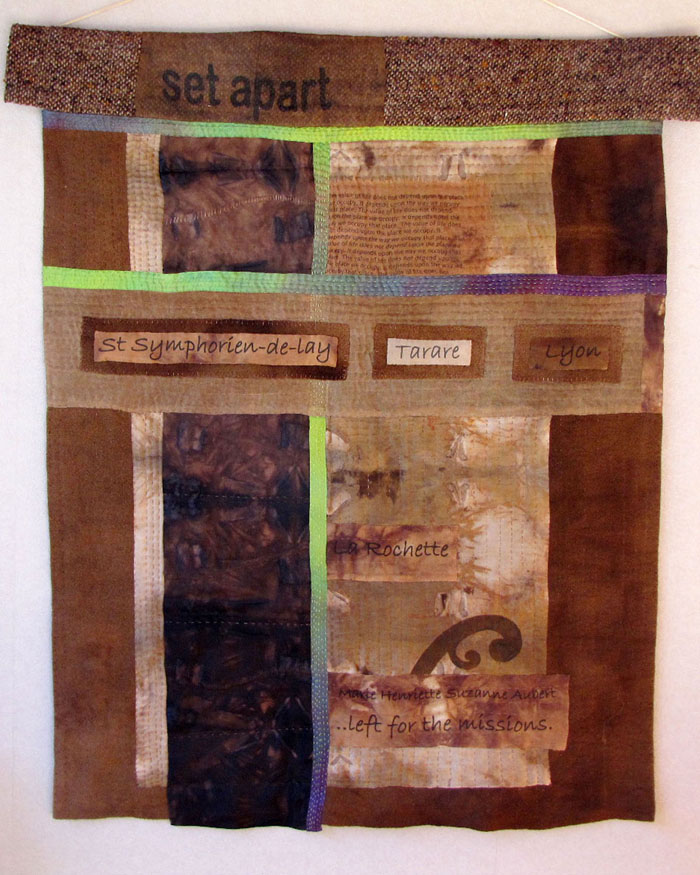 Places and events have significance and in a sense we are connected to/ belong to the people and places that shape us.

There had been a steady family tradition of providing welfare after the dramatic upheaval of the French revolution.

Suzanne lived in the French towns where prosperity came from the textile industry of silk and muslin, but it was also a seat of social tension. Beside her name in the roll of the  Benedictine boarding school at Rochette in Lyon it has written, ‘Left  for the missions’. 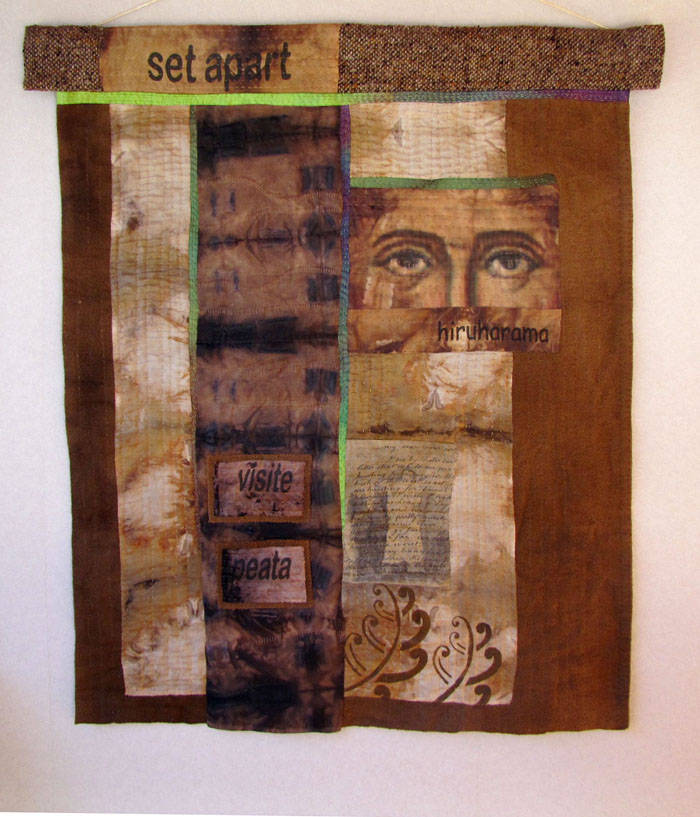 Palimpsest and images of the past are etched in the being, and in a sense give strength to convictions, while the physical can be less secure.

Prophetic words revealed themselves as part of the faith journey, none more clear than the schoolhouse at Hiruharama, which was described perfectly by the ‘eyes’of J ohn Vianney, only to be revealed to Suzanne when she arrived in the village.

Auckland and Peata, along with Hawkes Bay where she visited all over the district,  helped form Suzanne for  her mission at Hiruharama/Jerusalem on the Whanganui River. 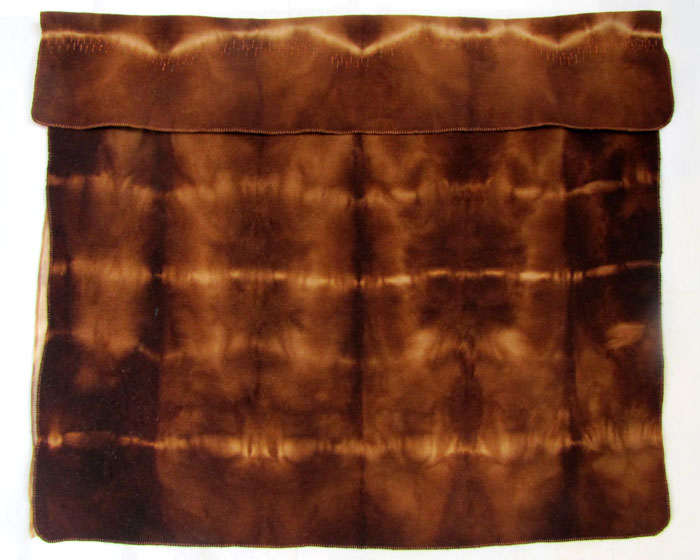 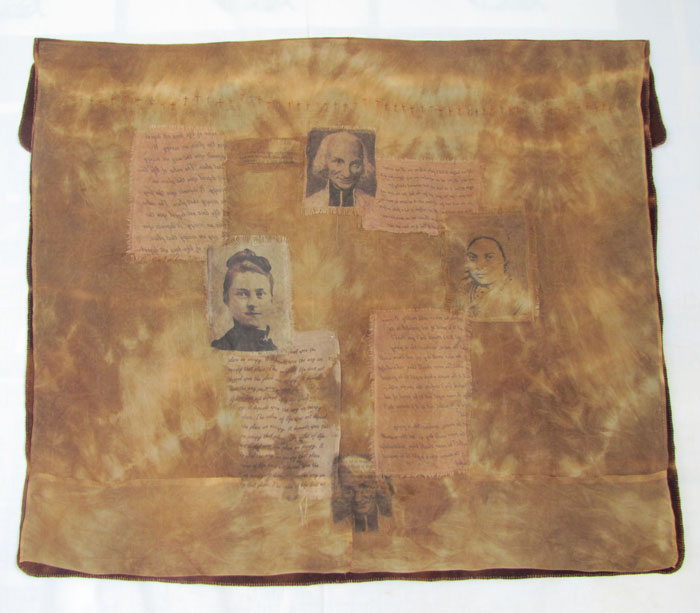 This work is about the work of Suzanne Aubert, and the marks and signposts she has left for others.

The blanket is a metaphor for the care and protection of the under-privileged, while the lining speaks of the intrinsic relationship with the spiritual dimension, the internal conversation, hence the writing facing inwards.

It was here she was writing the constitution, making medicine, teaching Maori language, science and medicine, and serving the people..

Her determination, fuelled by her spiritual beliefs was to be a cornerstone for the future.

Suzanne Aubert once said “A river does not return to its source”.

The earth and plant dyes (walnut and eucalyptus),are symbols of our land and the way it provides. 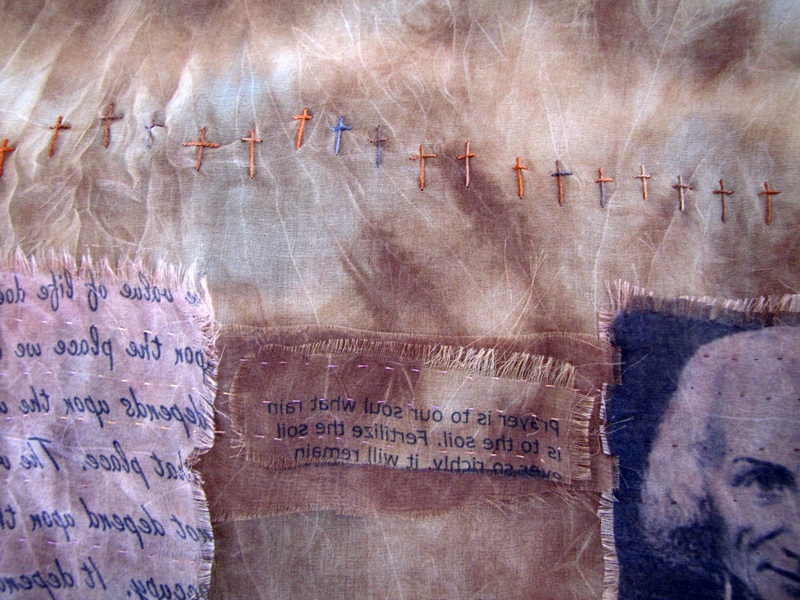 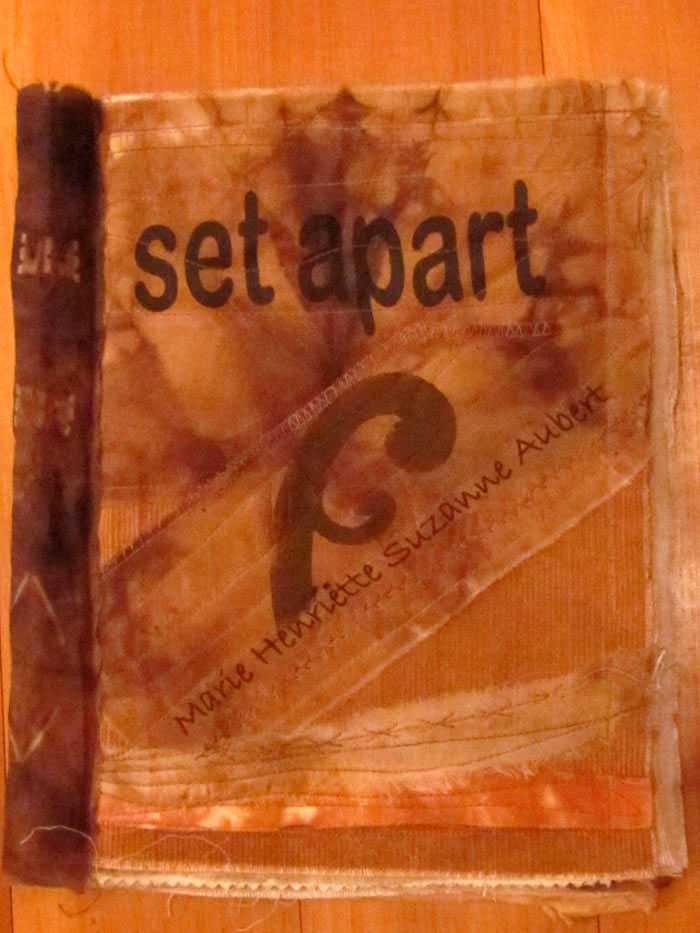 I made a fabric book for the 'Set Apart' exhibition, to explain a little more about Suzanne Aubert. 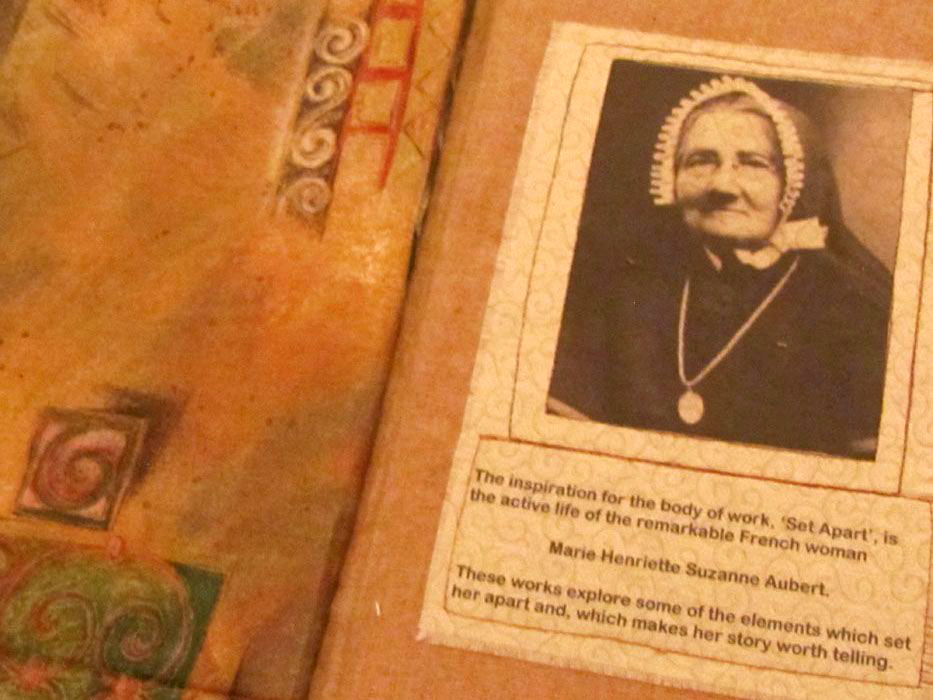 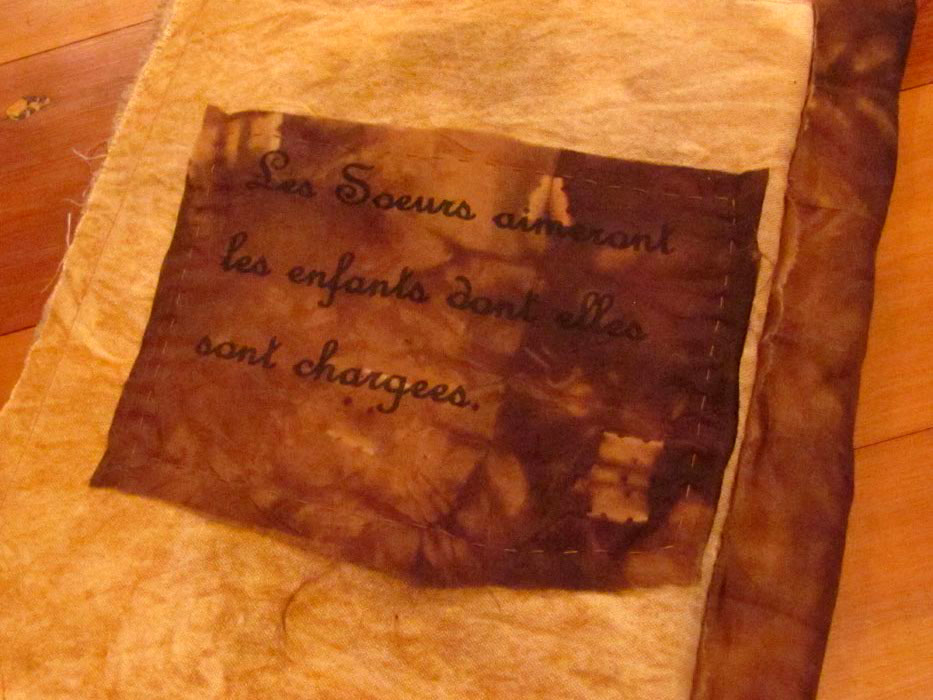 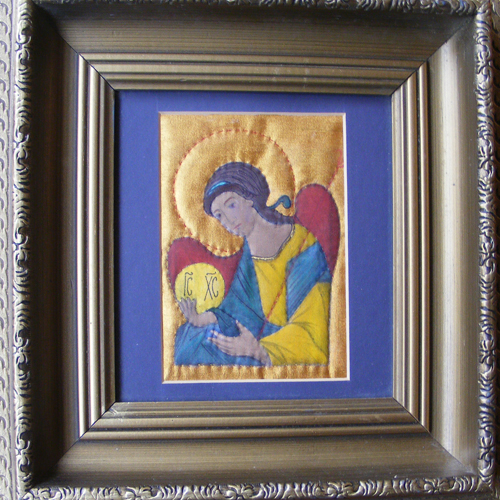 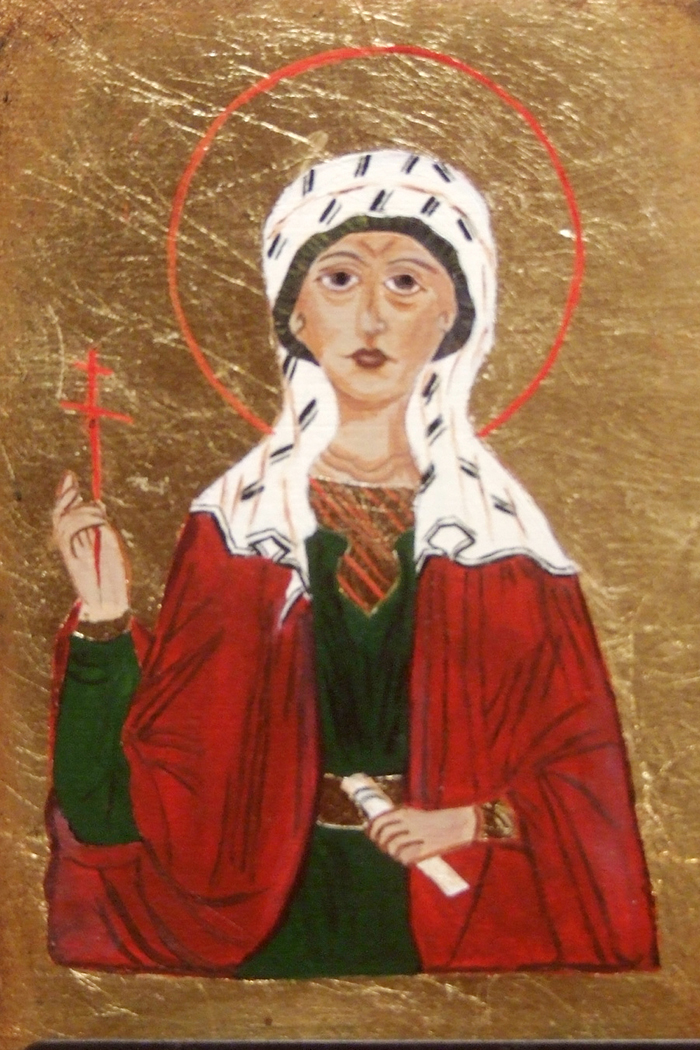 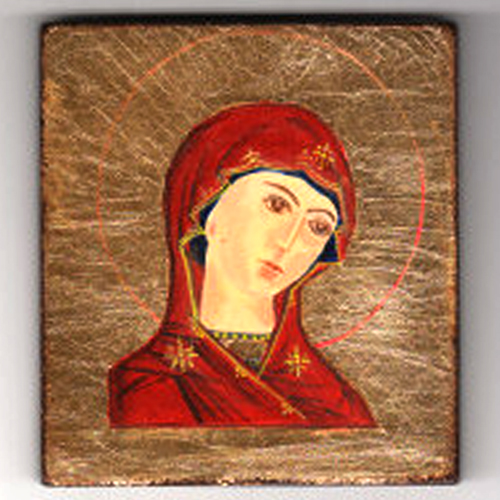 In 1911 Chan Yin went up into the bush in Ohakune pigeon shooting with his nephew Tommy Chan.  He got lost and Tommy came out to enlist help to find his uncle. Mrs Chan posted a reward for the safe return of Chan. The mills stopped working, set the alarms and eventually Chan was found up a tree, half frozen. He was carried out, put to bed and within a week was offering the reward. Nobody would accept the reward and so Chan gave a party. A poem was written by James Hydes after the occasion.

This quilt has used onion and leek papyrus for imaging on which to print the poem. The onion associated with tears for the Chinese and the persecution they have suffered.

The question marks are asking, "Have we really progressed as a people in 160 years".